First of all, I want to say that I am only describing these concepts in a way that I think I can build from one concept to the next.

The order that you define these various things in does not matter.  However, the data does not flow until it is all in place.

In an attempt to better relate the concept of where these various settings reside I have drawn the following diagram: 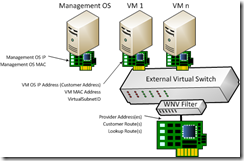 In this article lets talk about the Virtual Subnet Id in a bit of detail. This is a relatively simple setting.

It is defined in this way as it makes sense to want these settings to remain with the VM, not the virtual switch port.  So it just helps the brain to keep things straight when the UI calls this a vNIC or virtual NIC.

Now, down to business.

If you list the properties of a VM NetworkAdapter you will see the VirtualSubnetId.

However, if you look in the Hyper-V Manager GUI you will never see this property.  This is only available only through PowerShell or WMI as it is considered a far advanced setting.

This concept alone can be handy.

But, for the traffic to leave the local virtual switch you need the other settings in place and defined for the Network Virtualization module.

So, how do you set this?  Well, the Set-VMNetworkAdapter cmdlet supports multiple options.

If you have the VMNetworkAdapter object you can do this:

If you want to set all the VMNetworkAdapters on your Hyper-V Server to the same VirtualSubnetId you can do this:

The Key is that the VirtualSubnetId is higher than the VLAN tag top limit of 4095, it goes from 4096 to 16,777,215. A VMNetworkAdapter can only have one VirtualSubnetId at any time.  Setting this to 0 is the same as not having it set (just like VLAN tags).

The very last item to know about the VirtualSubnetID is that in the NVGRE internet draft it is mentioned that this can be utilized by the physical switching devices to more efficiently route traffic.  This opens a huge potential.  And if the fabric can self learn routes (the fabric does the forwarding, not the virtual switch), maybe some of the upcoming details to maintain routes could be avoided.  Huge potential.